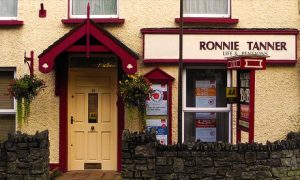 Breda and Ronnie Tanner, proprietors of the Ilenroy B&B in Skibbereen came to Future Generation Energy looking for a holistic answer to their energy problems.  They were using night-time storage heaters for space and water heating. Not only was the system not providing enough hot water but their electricity bills were astronomical at approximately €30 per night.  “It was crippling. We’d heat 3 tanks of water overnight and by the time people checked in at 4pm there was no hot water for showers.” said Breda of the problem.  They also had a very high level of humidity in the kitchen due to the steam iron being used there for the laundry services.  “The kitchen used to be totally fogged up when we were using the steam iron, you couldn’t see through the windows.” They wanted to increase their energy efficiency to cut costs and to reduce their carbon footprint.

After a thorough survey of their property and energy requirements 3 main needs were identified; space heating for the office, dining room, living room, landing/hall and kitchen, cooling and dehumidifying for the kitchen and hot water for the bedrooms.  A bespoke system would have to be designed to meet these requirements.

The system that was agreed upon was a mixed media solution using air source heat pumps mounted on the outside back wall and a thermodynamic panel on the roof to heat the water cylinders. 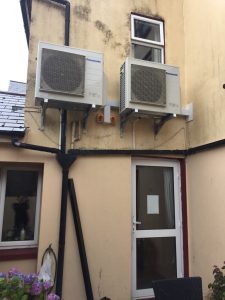 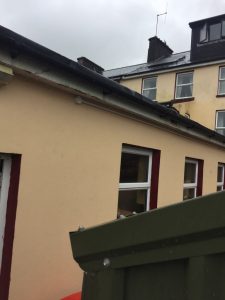 A combination of slim line floor radiators and wall mounted cassettes would deliver heating, cooling and dehumidifying action to the relevant rooms, as well as a ceiling mounted infrared panel for the office reception area.

One Tenth of the Running Cost of the Previous System! 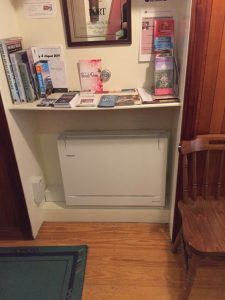 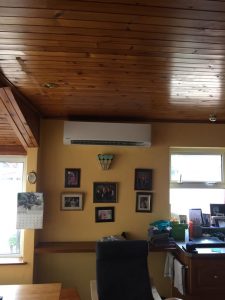 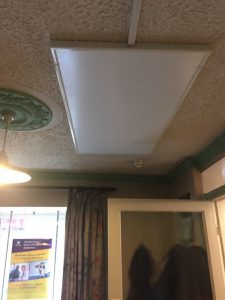 “I can’t understand how 10 people can have a shower and there’s still hot water!”

We went back to visit Breda and Ronnie 5 weeks after installation.  I asked them if their energy problems had been solved by the new system.  Although they hadn’t received an electricity bill yet to compare costs, they had been monitoring the consumption closely.  What had been costing them €30 per night was down to €2 to €3 per night and they estimate that at that rate system would pay for itself within 2 – 3 years.  “One night we left all the heating on and forgot to turn it off overnight and it only racked up €3.50.” said Breda. About the hot water requirements, she said “10 people could have a shower in the morning and it doesn’t run out. Its endless hot water and the showers are perfect temperature. I can’t understand how 10 people can have a shower and there’s still hot water!”

And what about the space heating/cooling?  They noticed how quickly the space heats, within 10 minutes it’s comfortable and of the humidity in the kitchen “Now it’s totally clear. There’s no steam on the windows.”

They’re looking forward to receiving their adjusted electricity bill for confirmation and so they can really see their savings come in.  In the meantime they say they are very happy customers and would “100% recommend” Future Generation Energy to their friends for providing the right solution, and for their respectful manner and polished finish.

A recent report from the World Economic Forum (Fostering Effective Energy Transition 2019 edition), put Ireland 12th in renewable energy transition readiness.  It doesn’t sound too bad but it’s no improvement from 2018 and The Climate Change Advisory Council believes that Ireland cannot meet targets to cut greenhouse gas emissions by 2020.  So, as a nation we are currently performing quite poorly, but it seems a change is coming!

On March 15th, 11,000 school students walked out of school and marched on Dail Eireann in Dublin to protest at the government’s lack of action on climate change.  They were inspired by 16 year old Swedish climate activist Greta Thunberg.

In May Ireland declared a state of climate and biodiversity emergency. Thunberg’s reaction:

“Great news from Ireland!! Who is next?
And remember: #ClimateEmergency means leaving fossil fuels in the ground” 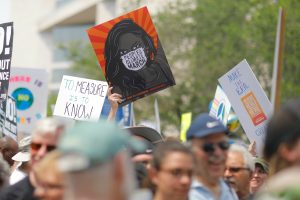 LEAVE IT IN THE GROUND

The Governments Climate Change Action Plan, of which a draft has been released, contains 200 actions to help try to meet our climate change targets.

In the area of renewable energies, it states that 70% of all electricity will come from renewable sources by 2030.  Further, a new scheme will allow homeowners sell solar electricity they produce back to the grid.

Ever since Ted Finch and friends defied energy company, Con Edison, in 1976 by erecting a wind turbine on the roof of a Manhattan Lower East Side tenement that they were inhabiting, channelled the energy back into the grid and watched the electricity meter spin backwards, the radical notion of selling energy to an energy company has been a possibility.

By 1983 it became a reality in the states. 36 years later Ireland is set to catch up. 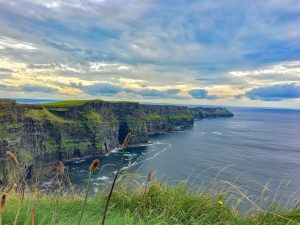 With advances in technology for solar PV systems and battery storage, it’s estimated that an average Irish household may save 50 – 80% on home energy bills.

This saving, along with SEAI installation grants of up to €3,800, the potential to sell surplus power to the utilities company in the very near future, and the possibility of charging an electric or hybrid car at home, the return on investment becomes more tangible.

Rising electricity costs mean that becoming self-sufficient in energy and potentially turning a profit is a homeowners dream.  In Ireland, contributing to climate change mitigation whilst making financial gains is a looming reality; it’s time to get ready! 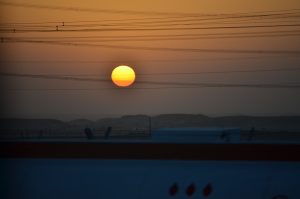 Designed and Development by : The Digital Department